Killed by the order of General Secretary of the USSR

Mikael Bulba was born at Leningrad in 1949 at Russia. His father was a general in the Soviet Army and a good friend of the Minister of War. He was formely a farmer before the death of his father which will change his life forever. After he knows his father was killed when the Italians soldiers defended their cities. He wants to be a good soldier, to make his father proud and avenge his death.

He joined the army at the age of 18. He participated the invasion of Africa and Australia. He was promote at Captain because he showed he has many talents in military tactics. He becames a major when he proved himself he succeed the siege of Sydney when he leaded a group of 150 000 soldiers in 1989. He promotes to colonel by the Leader of the Red High Council. He leads the invasion of Brasil and he believed he will promote to be a General by the Supreme Leader of the USSR. But, he will never receive his reward. That's makes Bulba angry and he attempted to try to kill th Supreme Leader. For punishing him, he was assigned to lead the invasion of New York City under the command of General Tatarin. He just can only lead the KGB of the United States. But he see a plan to how he will becomes a great general like his father. So, he arranges a meeting with the Americans Civilians and he disguises himself to be Mr. Jones.

Posing as Mr. Jones and an ally to the Manhattan Resistance, during the invasion of Manhattan, he is one of the first people you meet in the game, as he allows you to get your first weapon and battle the Soviets.

Jones is an older man, well past his youth, but his strong voice and his ability to stand up to the rigors of a frugal life beneath the streets of New York suggests Jones is in better shape than most men his age. He joins Christopher Stone as the Soviets storm into New York City, after Chris rescues him from a beating by Soviet security forces just after Troy Stone is captured by General Tatarin and a team of Soviet infantry. Jones, Chris and a New Yorker called Phil Bagzton, whom Chris rescues along the way out of the apartment building, flee underground through a sewer hatch as New York City falls to the Soviets.

From the beginning, Jones makes most of the plans and gives most of the orders to the fledgling resistance, displaying impressive strategic and tactical thinking. He directs Chris to a closed-down NYPD precinct in Brooklyn, allowing him to rescue Isabella Angelina, the leader of Manhattan Resistance and Troy Stone. But when he was in the sewer, he informs his mens about the activities of the rebels. He is the responsible about the death of Troy Stone. He informs General Tatarin where is his location in the city. He stops the brother of Freedom Phantom and make him to appear in the television. After this, Colonel Bulba bring him to Tatarin in front of him. The General Tatarin executes him personnally. Bulba saw a opportunity to be a general. He uses Troy Stone's death to manipulate Chris to insist to assassinate his superior. So, Chris Stone agrees to do the mission.

When Chris returned to the Rebel Base in the Manhattan sewers, he found the resistance members missing and the base under Soviet control. He also found a smug, triumphant, uniformed KGB colonel named Bulba waiting for him. Guessing that Chris will not know him, Bulba says "Hello, Chris", in Mr. Jones' exact voice, proving beyond a doubt it was Bulba the entire time. Bulba mocks Americans, saying "You were all so busy entertaining yourselves to death, while our great nation was busy- busy liberating Europe from the same fate". Bulba addresses Chris, possibly over loudspeakers, while Chris flees deeper into the sewers and battles large numbers of Soviet troops, refusing to surrender. He orders 300 soldiers to attack the rebels by invade the sewers of New York City. The rebels was captured and killed. Isabella was bringed to Fort Jay for interrogation and Chris Stone has escaped in another rebel base. Bulba believes the fight against the rebels is finished but he was wrong. While Chris is able to escape, Bulba is also successful- his superior, Tatarin, is dead and Bulba "respectfully" takes his place as general in a public address on SAFN.

It is possible that during his time with the Resistance as Mr. Jones, Colonel Bulba gained a compasion for the citizens of New York. This can be seen during the SAFN broadcasts compared to Tatarin's broadcasts. Bulba institutes a holiday, starts a youth program and a animal shelter/meat rationing station. However, Bulba would also have a practical reason for doing this- being brutal and harsh to all of the city populace would only drive everyone into the hands of the resistance and Soviet forces acting compassionately would help persuade more civilians to respect the authority of the occupation forces or even take their side.

As Mr. Jones was merely an alias of Bulba, Jones makes no more appearances in the game after Bulba reveals himself to Chris at Resistance headquarters, following General Tatarin's assassination. After the assassination of Tatarin, the Soviet suffered about his death but Colonel Bulba takes control of the situation. He informs the Minister of War about Tatarin's death and he promotes Bulba to General and to be the Commander in Chief of the Soviet Armies in the United States.

Chris captured the SAFN Studios and he rallies a lot of peoples in New York to fight against the Soviets. General Bulba lost the control of the situation and the rebels attack the Governors Island by surprise. When the rebels win the war, he escaped and returns at Moscow to inform the Supreme Leader. After the discussion, General Bulba was executed and the Supreme Leader assigned General Andropov to be the new leader of the Soviet Invasion Forces of the United States and he gives the general a blank check. He said to the general the United States must to be under control of the USSR.

General Bulba does not appear in the assault on Governors Island, nor the storming of the island's historic harbor fortress Fort Jay. His status and whereabouts are unknown at the end of the game. Judging by the fact he failed to capture Chris, the entire Soviet army was exterminated in Fort Jay and his force was driven out of New York by the Resistance, he most likely will be executed for failure or demote to lower rank. Despite the circumstance, in the end, he was defeated by the same man and faction he used to gain power in the first place.

During the story and under his alias as Mr. Jones, he is described as a opportunist and ruthless military official who are willing to sacrifice everyone including his own men and superior to achieve higher power. Judging by the fact the he willing to let the Resistance grows and sabotages the long run operation of the Soviet in the US invasion, it can be seen that power and status are more important to him rather than his duty, missions, his country men and comradeship. These traits make him worse than Tatarin since Tatarin willing to die with own men in battle rather than sacrificing them to gain power for his own.

Mikael Bulba is a man of wit and is a technological savvy. He uses this to train soldiers and turn them into freedom fighters. As Mr. Jones, the first ally you meet upon starting the game, will help you fight your way through the game's first map (which is essentially a tutorial). You won't encounter many enemies in the first level, but Jones will help you kill the few that you do run across. Jones leads you along a pre-scripted path. You follow him around, but can't issue him orders or lead him off the beaten path. He's got exceptionally good aim, and can often score headshots with his revolver. He is also invincible, so there's no need to worry about his safety. 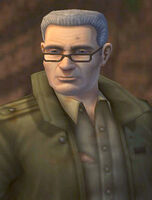 Mr. Jones
Add a photo to this gallery
Retrieved from "https://freedomfighters.fandom.com/wiki/Mikael_Bulba?oldid=4596"
Community content is available under CC-BY-SA unless otherwise noted.