Leader of the Manhattan Resistance

Christopher Stone, along with Isabella Angelina, leads the Manhattan Resistance in their fight against the oppressive Soviet invaders. He is a former plumber who fights for hes neighborhood and becomes the leader and symbol of the celebrate urban guerilla group known as the Manhattan Resistance. He founded the Resistance with Isabella and together they lead the Freedom Fighters to liberate New York City against the Soviet soldiers.

Born and raised in New York City, Brooklyn, Chris is just a blue-collar New Yorker with a shelf full of football trophies and a stack of monthly bills. At 32, Chris's biggest influence in life is still his family. His dad is an Irishman, a retired rescue worker who calmly saved lives for years, but has just as calmly put a handbag thief into the hospital. His mother is a Native American schoolteacher. Her father taught the old Indian ways to Chris and his brother Troy.

Chris and his brother Troy live a relatively simple and peaceful life and did not pay attention to the Soviet threat until later on in their lives. After they both left college they made a living as plumbers. One day, on route to fixing a leaking plug and garbage disposal at Isabella Angelina's apartment in midtown, Troy brings up the 'Soviet threat', which Chris dismisses as 'conspiracy crap'. All that changes when they find Angelina's deserted apartment only to be greeted by Soviet Soldiers, led by General Tatarin, who arrests Troy. Chris escapes, hiding in the bedroom. Chris then meets Mr.Jones, who has just killed a Soviet soldier and together they make their way to the streets. Chris later becomes the "Freedom Phantom", fighting the Soviets in order to find his brother and free the citizens of the United States.

8 months later, Troy appears on SAFN, forced by General Tatarin to expose Chris' identity and compromise the Resistance. Failing in the process, it leads to his death. The Resistance later raid the SAFN headquarters, killing General Tatarin and his sucessors, leading to the liberation of the city.

The Wanted poster with Christopher 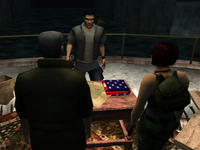 Christoper Stone, Mr. Jones and Isabella.
Add a photo to this gallery
Retrieved from "https://freedomfighters.fandom.com/wiki/Christopher_Stone?oldid=4691"
Community content is available under CC-BY-SA unless otherwise noted.