Freedom Fighters, originally titled Freedom: The Battle For Liberty Island or Freedom: Soldiers of Liberty, is a 2003 third-person shooter video game available for the Microsoft Windows, PlayStation 2, Xbox and GameCube. It was developed by IO Interactive, using a modified version of Glacier engine and published by Electronic Arts. PlayStation 2 version in Europe was published by IO Interactive. The game is set in an alternate history and the player takes the role of Christopher Stone, a plumber-turned American Resistance movement leader who fights against the Red Army that invades and occupies New York City in the present time.

Freedom Fighters is third-person shooter, in which the player navigates through the streets of New York City with a controllable squad of teammates while fighting the occupying Soviet forces. The player gains charisma points by performing various deeds, such as capturing a base or destroying enemy supplies. The more charisma that is gained, the more squad-mates the character can recruit, including leaderless guerrillas and wounded Russian soldiers, up to a maximum of twelve. Freedom Fighters uses a simple method of controlling recruits in battle. In the game, the player can command recruits by giving them simple orders such as "follow", "attack" and "defend", but in most situations, they take care of themselves. Given the terrain of New York City after the initial invasion, the Resistance usually stations its soldiers in covered positions like craters and buildings.

The console versions' multiplayer revolves around securing flags and bunkers. The flag is usually in the center of the map. Bunkers are positioned around the map and spawn either Soviet soldiers or American freedom fighters. Players can know who the bunkers belong to because of a star above each one; a Soviet bunker is marked by a red star, while an American bunker is marked by a blue star. A game can host up to four players via split-screen who may choose between the Soviet and American sides. Each side has a different set of weapons which the players can switch during battle. In each map, there are several areas where weapons and ammunition are stored. Each bunker also has one medical kit and one ammunition can, so every bunker is vitally important. The players can select a map to fight in: Greenwich Village, where there are four bunkers surrounding the flag; Brooklyn Rooftops, with four adjacent bunkers with the flag between the middle two bunkers on a building; and Fort Jay, a nighttime scene with four bunkers at the edge of the map with the flag in the middle. The players' charisma meters are set to eight, so each player can have a maximum of eight soldiers under their command; however, if it is a four-player battle, each player can control a maximum of four soldiers. The PC version does not support multiplayer.

The Soviet Union became a world superpower by dropping the first atomic bomb on Berlin, ending World War II in Europe, then the Soviet Union dropped the Atomic Bomb on the Japanese City of Sapporo to end World War II altogether, soon relationships between the US and the Soviet Union fell through, and when the US finally developed there own Atomic Bomb in 1949, the Cold War had begun. The United States/UN Involvement in the Korean War caused the USSR to prop up communist states throughout Europe, Africa, Eastern Asia, Central America, and South America from 1953 to 2000. In 2001, the USSR launched an invasion of Brazil, Argentina, Venezuela, the Middle East, and Oceania sparking World War III. The United States retaliated in 2003 by launching an invasion of Soviet Occupied Iraq and Syria, as well as making landings in the Iberian Peninsula. By now, World War III is an active stalemate in France, Iraq, Saudi Arabia, Eastern Asia.

In New York City, plumbing brothers Christopher and Troy Stone travel to meet with their next client, an activist named Isabella Angelina, only to find her apartment abandoned. The Soviet Union launches a surprise invasion of the United States Eastern Seaboard, the Southern United States, and California in retaliation of the US invasion of Iraq and the overthrow of Saddam Hussein. Soviet soldiers, led by General Tatarin, seize Troy. Amidst the attack, Chris escapes to the streets, encountering a man named Mr.Jones and resistance member Phil Bagzton. After rescuing Isabella from a police station and Troy from a post office, the group retreats to the sewers and sets up a base of operations as New York is lost.

Months later, Chris, Phil, and Isabella sabotage key Soviet facilities and reclaim areas within the city, building up a resistance group of New York citizens and disillusioned Soviet soldiers. Delivering serious damage to the Soviets, Chris becomes known as the Freedom Phantom within the Soviet-controlled media, SAFN. Later, Troy is captured by Soviet troops and tortured for information. Forced into issuing a public statement aimed at the resistance to cease their actions, he instead urges Chris to continue fighting for which he is executed by General Tatarin. Mr. Jones suggests assassinating Tatarin in retaliation and Chris succeeds, only to return to find Isabella missing and the Resistance base occupied by the Soviet army. The operation was orchestrated by Mr. Jones who reveals that he is the KGB agent Colonel Bulba, as he explains this as his source of information. Betrayed, Chris escapes with Phil and others to a new underground area while SAFN reports on the death of Tatarin, Colonel Bulba's promotion to General and the end of the resistance in New York.

During the winter, Chris leads the resistance deeper into occupied New York, culminating with a major raid on SAFN Studios. He uses the station to send a broadcast encouraging the city and beyond to rise up and end the Soviet invasion and to liberate Soviet Occupied territory within the United States. A final assault on Governors Island consisting of massed Resistance forces is planned. After taking over the island and rescuing Isabella, New York is liberated for the time being as Chris and the group solemnly celebrate their victory.

In 2002, EA Games officially announced Freedom: The Battle for Liberty Island, which would later be renamed Freedom Fighters, at the Electronic Entertainment Expo. The concept for the game originally involved a turn-based strategic mode as a major element of gameplay.The game was developed by IO Interactive, creators of the Hitman franchise and Kane & Lynch: Dead Men, using the 3D Engine Glacier. This engine made use of the OpenGL and Direct X graphic APIs and would be used by IO Interactive until the Glacier 2 engine was developed for Hitman: Abdolution. Freedom Fighters was released by EA Games in the US on October 1, 2003, a full week after the UK release. An EA spokesperson stated that retailers in the US had requested the delay. The game is one of the few developed by IO Interactive that was not published by Eidos Interactive.

The Freedom Fighters original soundtrack was composed by Jesper Kyd and released on September 29, 2003 by Sumthing Else Music Works and Nano Studios. It was GameSpot's "Best Game Soundtrack of the Year 2003" and Game Reactor's "Best Game Music of the Year". Tracks 1, 2, 3, 9, 10, 14 and 16 are performed by the Hungarian Radio Choir. The music has grand, Soviet-style choral arrangements and the synth parts have been described as "Vangelis on steroids". Kyd researched Russian music and musical scales prior to composing the soundtrack, citing Soviet history and the Cold War as major influences. Kyd composed the score in Manhattan shortly after the September 11th attacks.

He describes his thinking behind the score thus:

"I researched Russian music scales and specifically what makes Russian music so unique. The history of the Soviet Union and the Cold War conflict were also major contributing influences. Not many people know this but I wrote the Freedom Fighters score in Manhattan right after 9/11. It was quite a strange time writing music for a story about a foreign power invading Manhattan. I spent a lot of my time just playing the game to get a real, in-depth sense of the experiences that I needed to dramatize. I probably spent way too much time playing the game, but I just loved the fact that you could become a freedom fighter and help free New York City from an invading army".

Freedom Fighters received generally positive reviews, with the PC version scoring an 80 overall on Metacritic based on 16 critics' reviews. It was praised for having a excellent AI for squad tactics, which served to enhance the sense of immersion in the "extremely detailed" environments and maintain the illusion of working with a team. The game's sound quality was also of note, both for the realistic combat noises and the game's Russian-influenced music, which "adds a perfect level of drama to the proceedings". Critics noted that while the game "does a marvelous job" of creating a realistic environment, the story was lacking in substance and fairly predictable, and while the squad AI is good, the enemy AI was lacking. Another source of criticism was the games length. The game can be cleared relatively quickly, but offers little replay value. According to Jeff Gerstmann of Gamespot, "The only real problem with Freedom Fighters is that there simply isn't enough of it".

It received a score of 7.5/8.5/8 from Electronic Gaming Monthly: the first reviewer, Joe Fielder, called the game's core gameplay mechanic "damn fun to play", but criticized its cutscenes and said that "you come away from Freedom Fighters wanting more. Just when the game really hits its stride, it's over—and neither playing its under utilized multiplayer mode nor beginning the whole affair over again on a harder difficulty setting will quite satisfy your need". The second reviewer, Shawn Elliott, called it "easily one of the best all-out action games I've played all year".

On April 6, 2004 Eidos UK revealed plans for the sequel. Eidos announced it would distribute the sequel in the first half of its financial year 2006, which would mean the latter part of 2005. However IO Interactive announced development of a new intellectual property, Kane & Lynch: Dead Men, casting the future of a Freedom Fighters sequel in doubt. In late 2007 a representative of IO said in an interview about the upcoming Kane & Lynch: Dead Men that a sequel for Freedom Fighters was still on the company's 'to-do' list. 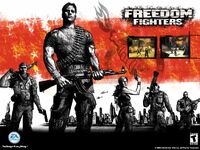 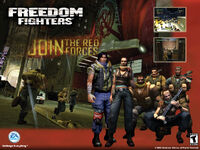 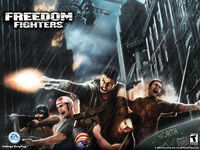 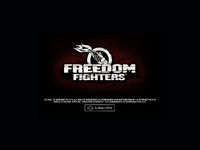 Add a photo to this gallery
Retrieved from "https://freedomfighters.fandom.com/wiki/Freedom_Fighters?oldid=4747"
Community content is available under CC-BY-SA unless otherwise noted.